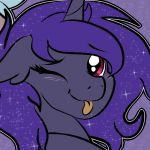 Idk what to say except I got a new mocha x Slythe shipping child. the purple demon with cape and jacket (the older one) is a new oc, commissioned from @mysticPhase on Instagram as a mocha x slythe shipping child. her name is Charlotte.
I decided to have Charlotte be the oldest, and bailey is the youngest. (smol sibling on left, who be bleppin.)
I've had a lot of unmotivation and slight bit of depression so...I've sorta not been drawing much. sorry. for that.
Art (c) mine
Bailey (c) mine
Charlotte (c) mine, design made by @mysticPhase on Insta
Svtfoe (c) Disney 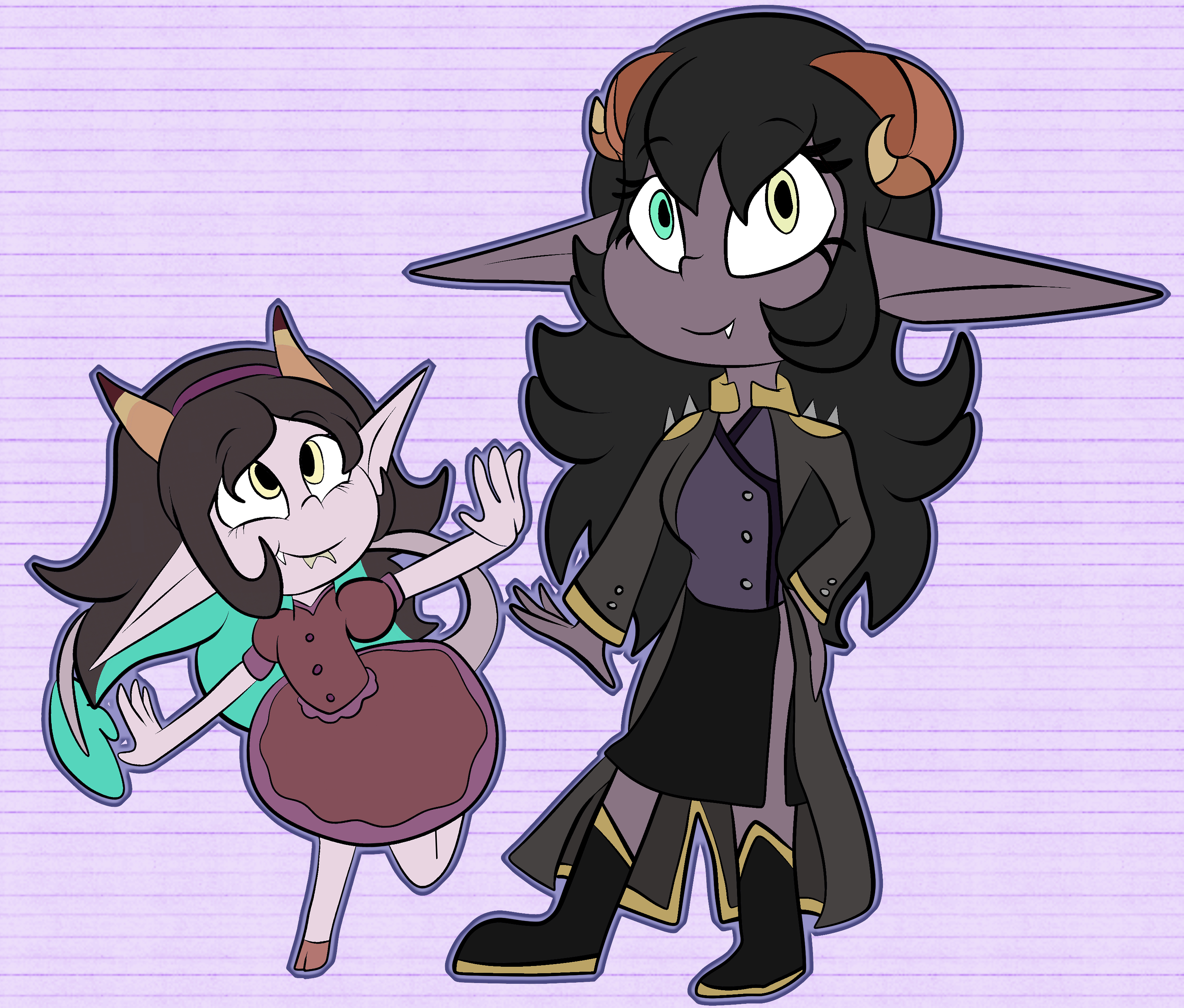 SHIPPINGG CLOTHES SWAAAAAPPP.
Nothing like an art piece of my favorite star vs oc otp, Moythe (mocha x slythe) doing a clothes swap.
Imagine. Its late at night. Youre at home. You walk into the master bedroom only to find your demoness crush in your spiffy flashy attire.. only for her to plead u to try her dress on.
Ohhh The things slythe does for his goat waifu.. er.. yknow. He clearly didn't wanna wear a dress, specifically HER dress. But here we are. Hims doing it to not be selfish and make his widdle cocoa happy.
I.. haven't done much lately, sorry for the silence. ; ;
I mostly did this art as a joke. So eh. Decided to post it
Mocha (c) mine
Slythe (c) My boyfriend
Art (c) me
SVTFOE (c) Disney 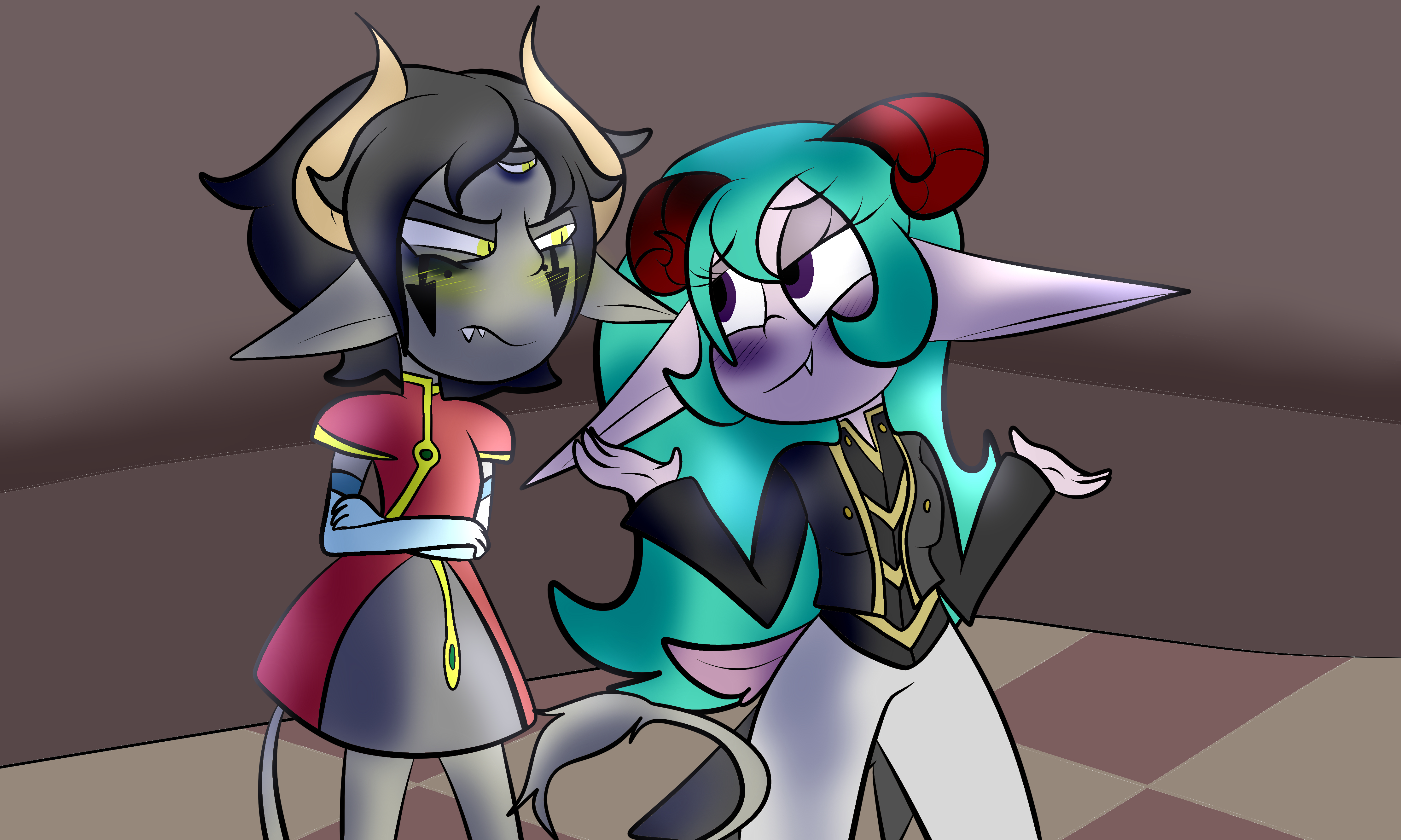 ARTISTS/VOICE ACTORS NEEDED AND SERIES PLOT:
Needed help with my series beyond the board still! if anyone wants to see a teaser trailer, and an animation meme sneek peaking a view of the style it'll be animated, I have examples linked here
BTB teaser: -1a7FQ8
Animation meme with the main characters:
keep in mind this is not a paid job. this is for if you wanna be a part of my series and voice or do art for it. you will be in the credits for it. uwu
Once I have all the main voice actors, I will be opening a discord server for the team ❤
for what I still need:
Voice actors, Concept artists, Background artists, character designers, and possible animatic artists
I have voices for the following already:
Ashlyn
Jack
Stephanie
Hannah
Voices i need still:
Fazz (any gender can voice them as they are not binary 🙂 )
Sphicks halberd (must be good at villain voices. May have someone already interested but if he changes is mind then will need sphicks backup for sure)
And
tim. Hes ashlyns dad.
as for what this series is about..well..
heres info below on ARCS and PILOT DETAILS!!
POSSIBLE SPOILER WARNING:
The PILOT Episode quick information:
Ashlyn moves to The city of Woodpine, and in the beginning, she's depressed that she has to change schools, and home town.. Her family transferred to the town of Woodpine from Ecrin city. she chooses a bedroom unpacks, gets a mattress on the floor and sleeps on that. the majority of the pilot is to mainly introduce Jack and Ashlyn and meet other characters in the series.
The pilot would end with hints of her new home being haunted.
Arc One: Jack and Ashlyn find a shop in town called spooks and terrors emporium. which ashlyn has been wanting to find a ouija board and begin saving money to buy it. Once played, everytime they ask the board a question, only the words "ill" and "sick" are answered to questions that wouldnt even be answered with those words that JACK would ask. (when ashlyn asks the board, it does nothing) After a while, Ashlyn says this is a waste of time, but when putting the board away, they forget to spell goodbye to the board.
Arc Two: Jack becomes very ill. They cant figure out why, but everything goes so bad that he may not live through his illness. Ashlyn is devastated by this, so she plays the ouija board by herself and calls upon the dead for help. A demon named Sphicks halberd appears before her and offers her a deal: Her soul for jacks soul to be free, since he is the reason Jack is ill.
She accepts his offer, but only if he allows her to remain alive in the mortal world Until the day comes where she is to naturally die. weather that be from old age or a sickness. jack gets better episodes later. though.. As time goes by, Ashlyn grows slowly and slowly into what people think is a delusional girl, which causes many problems for her in the long run. example: she talks to herself, gets spooked by nothing there. Its all just a trick from Sphicks. as only ashlyn can see him.
one big Problem is that sphicks Halberd is still wanting to take her soul anyway, So hes running her down until she cant fight back anymore. once she loses the battle of will,he will take her and posess her body, bringing both her soul AND physical body to his home in between earth and Heaven/hell. Purgatory. where his kind roam. and feed off the fear, of the living, and drag them inbetween dimensions.
As for arc three? its just a series of episodes of jack trying to figure out ways on how he gets her back.
So TL;DR:
it will revolve around two main characters. Ashlyn and Jack! Ashlyn moves into a new town with her father. her mom had passed away earlier on that year. As soon as she attends the new school, Ashlyn gets bullied alot because of all the demonic stuff she likes to talk about, with Ouija boards, and horror movies, and her interest in some day being a demonologist. One day, shes bullied so much that one of the studants, jack, Steps in and stops the bullying.
the two then become friends shortly after getting to know one another more.
jack soon learns that his new friend is interested in buying and playing a Ouija board, to help her with her demonologist study.
Jack gets freaked out and doesnt want anything to do with Dangerous spiritual things, Though he supports her and wants to help her live her dream. After they play with the board jack gets sick, and ashlyn gets posessed by a demon named Sphicks Halberd and he whisps her away to a shadow dimension full of beastly shadow creatures in between worlds. can ashlyn and jack find a way to free them selves of their issues, and life threatening situations? 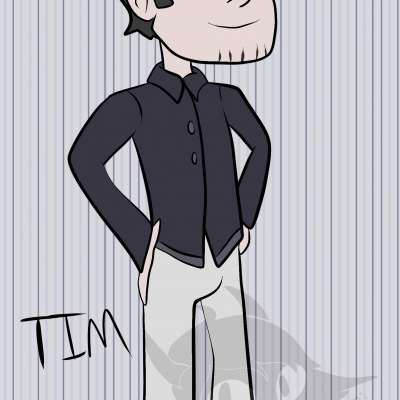 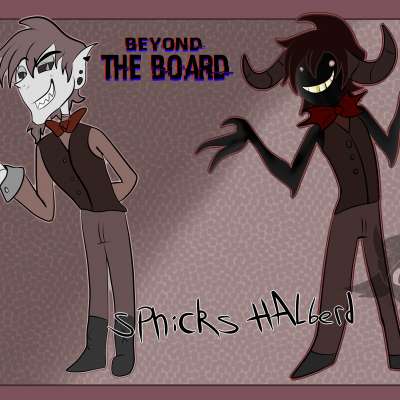 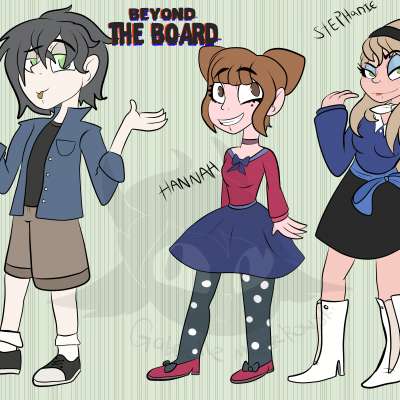 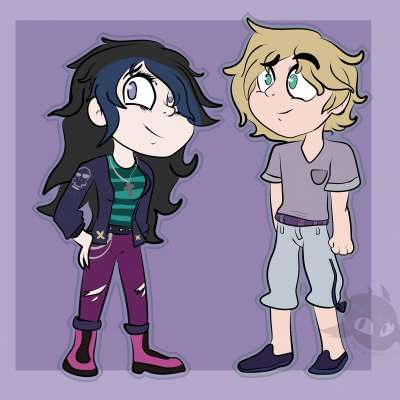 I need to start learning how to draw more then one constent pairing at a time. so.. I drew a ship my bf and I have had for a couple years. these two ocs are a c l a s s i c nature loving duo. The stallion is named Chauncy, and my the one on the right, is my mare oc. her name is Bru lotus. or BruBru for short.
I'm a HUUUGE bird lover. so had an idea to draw these two Tree hugging nuts admiring birb in the canterlott gardens uwu 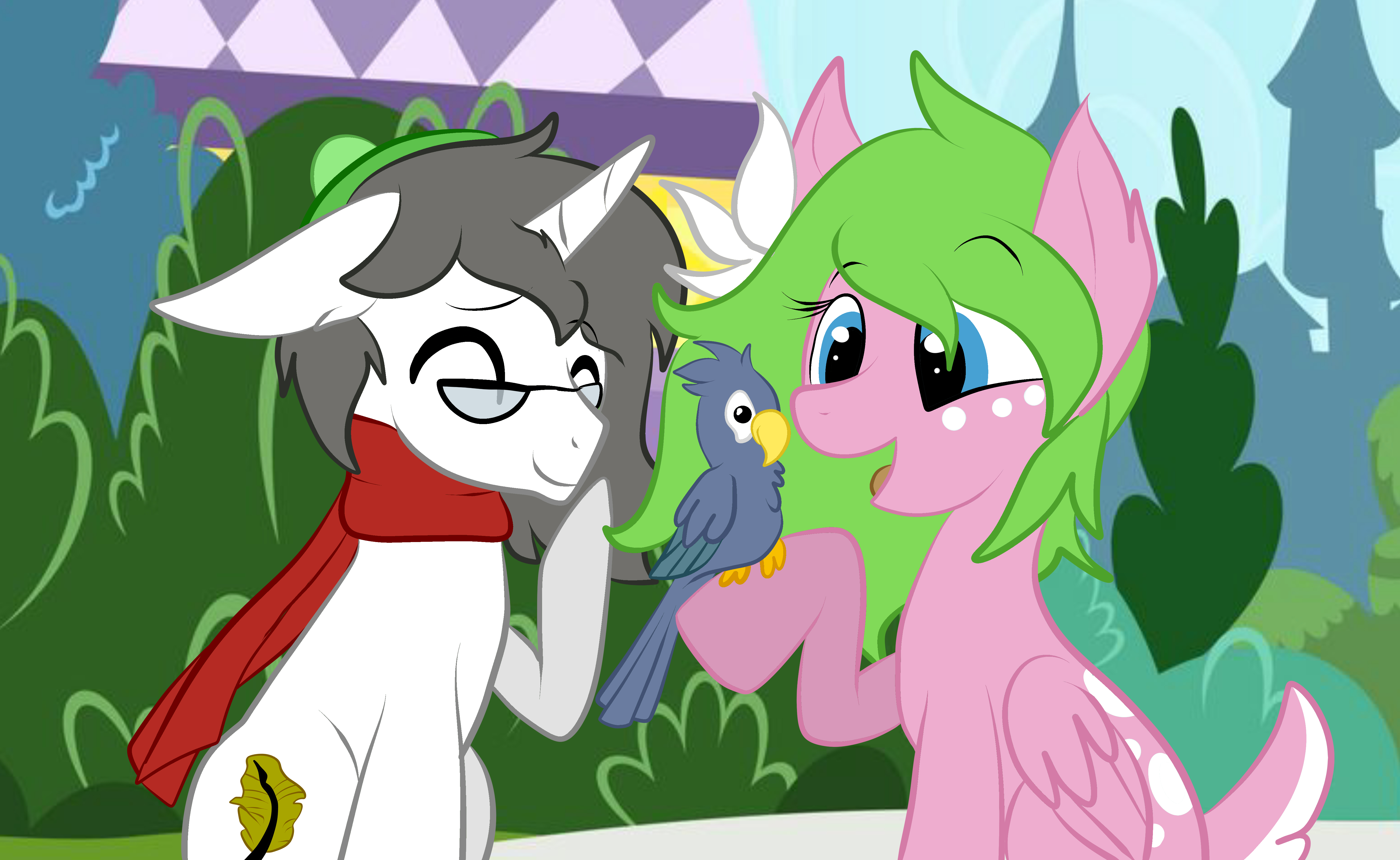 Been a long time since I've drawn any recent art of my Furry oc, Elinora. I've been in the furry art mood lately and figured. "ey. i have a wolf sona! let me draw her! " and did this! mostly wanted t practice drawing more furry art since I know my last few arts arent that great. been trying to practice!! hopefully I can get better as I go. uwu

if anyone likes my furry art commissions open!
bust shot (like this one) of your furry oc is $25

Art © mine
Elinora the wolf © mine 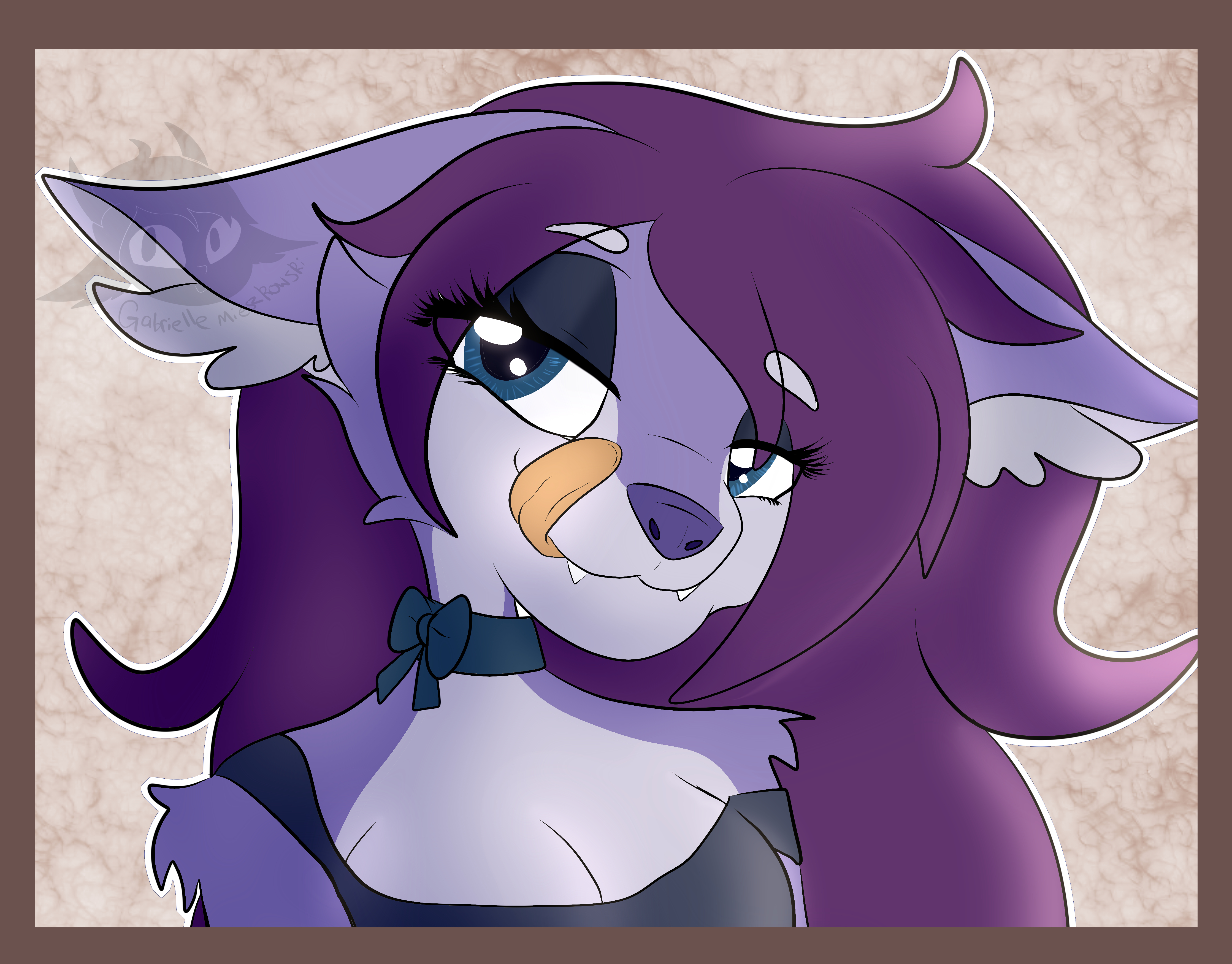 I am a digital artist and plush artist. ^^
I mostly love to animate, but I do mostly digital drawings! My profile says I do mlp art but I do art for star vs the forces of evil, and Steven universe too! ^^ I'm 23 and have been doing art since I was a little girl. Of course they were only paper doodles of stick figures back then xP
I digitally draw with paint tool sai and a Wacom intuos pen tablet
I animate with a paid subscription toon boom harmony ^^
I started animation back on flipnote studio xP
I was invader-dot on the old flipnote hatena 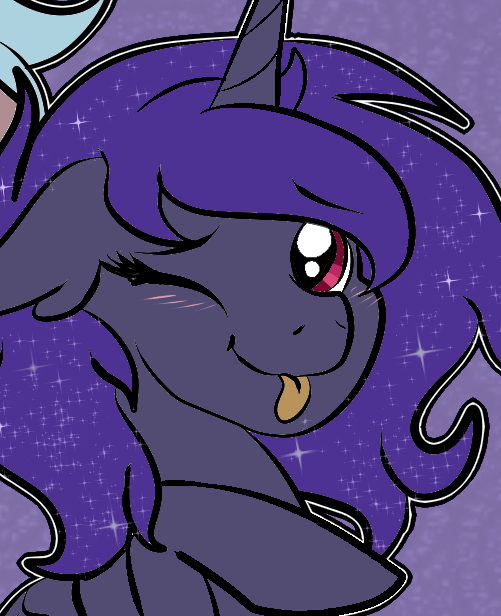